Fiona (Fee) Stagg is a NLG based in North Staffordshire and Stoke on Trent. She is an experienced Governance Professional having worked in a medium sized Multi Academy Trust in the role of Head of Governance and Policy and is now self employed. Fee is author of a number of governance and clerking blogs; some of which have been featured in national education press.

She is also a Chair of Trustees and has experience of chairing, and clerking in a variety of settings including IEB. Fee was short listed in the NGA Outstanding Clerk awards in 2017 and has subsequently been invited to talk at a number of governance conferences on clerking.

By background Fee is a Chartered Town Planner and has experience in strategic planning, bidding and in business planning and action planning for voluntary sector groups.

She  can be contacted via Purple Governance or on : fiona@sbwgovernance.co.uk. Fee tweets as @dogpaws23 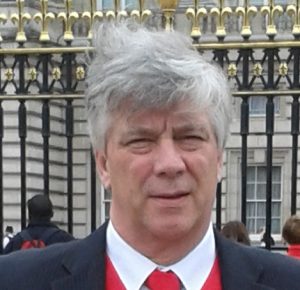 Duncan has a wealth of experience as a school governor, leading to him becoming a National Leader of Governance (NLG) in 2013. Having received formal NCSL training on carrying out External Reviews of Governance, Duncan has worked locally and nationally completing External Reviews of Governance, always looking to change governance so that the education of all pupils in the school is enhanced. These External Reviews have included not only single schools but also Multi-academy Trusts (MATs). Duncan is always keen to encourage more informal “conversations with governing boards” to help them inform their future development needs and continuing professional development.

As an NLG Duncan is currently supporting and mentoring Chairs of Governors both helping new inexperienced Chairs and also helping resolve concerns within governing boards and with other senior leaders of schools.

Duncan sits on and frequently chairs school admission appeals and Exclusion Independent Review Panels, having received annual training, over the last 10 years, to carry out these important and difficult appeal processes. Duncan’s experience of sitting on such panels means that he is now often asked to act as an independent member of panels across schools in the northwest of England. In the last twelve months Duncan has sat on complaint panels, grievance panels and disciplinary panels up to and including dismissal of headteachers as well as acting as independent investigation officer on complaints.

Another aspect of Duncan’s vast experience is working within Interim Executive Boards (IEB). In this situation the level of support to the school is both high and intense, the IEB having replaced the governing board of the school. In the last four years he has undertaken IEBs in two schools both with significant safeguarding and staffing issues. In both cases the successful appointment has now finished with the schools being deemed “good” at subsequent Ofsted inspections.

Duncan is based in Cheshire West being chair of an outstanding 420 pupil primary school, a governor at a large 1750 pupil secondary converter Academy, a governor and vice chair at a secondary special school for pupils with SEMH and a governor at a 350-pupil primary school in Wales. Duncan also has a fairly unique different perspective of governance in that he is a trained, registered lay inspector of schools in Wales, having been involved in over 100 school inspections since September 2010.

By background Duncan is a polymer chemist but has been self-employed since 1996, He “headhunted” senior managers for new managerial positions in the food, chemicals, polymers and associated industries from 1996 before retiring in 2012. Because of his industrial managerial background Duncan has particular strengths around finance issues in schools believing that all schools need to be continually looking to improve their financial effectiveness. He is currently the Chair of the Cheshire West Schools Forum.

He is also passionate in believing that any governor, always needs to keep up to-date with refresher training. As such he has recently completed again Prevent Online training (October 2019), Safer recruitment training (August 2019) and SFVS training (November 2019)

Duncan has appropriate professional indemnity and public liability insurance as well as being enhanced DBS checked (May 2019). Duncan was delighted to receive an MBE in the Queen’s Honours list in January 2016 for services to education, which he feels very honoured to have been nominated for. Duncan can be contacted via Purple Governance or on: phaworth@whieldon-blythe.co.uk

StellaR Education Solutions Ltd was formed in 2005. Based in Liverpool, the company has several associate consultants who deliver training and support to individual schools and NW local authorities as well as organising open courses in Liverpool. The company drew on the reputation and experience of its founder member to offer efficient, reliable and high quality support to schools governors and leaders.

Stella Owen is the founder and managing director. She has an M.Ed and was a Primary Ofsted Team Inspector. In her early career she taught in primary and secondary schools as well as Special Educational Needs Support Service. Prior to forming the company she managed Liverpool School Governor Services. Until recently, she was Chair of Governors of a large secondary school in Sefton.

She has professional indemnity and public liability insurance.

Stella can be contacted via Purple Governance or on stellaowen@btinternet.com

Ariana Yakas is a NLG based in Manchester. She is a Chair of a three school (primary) Multi Academy Trust with recent experience of chairing an Interim Executive Board.  Ariana has been a governor for over 15 years, having helped a number of governing bodies improve and develop. She has been trained and carried out External Reviews of Governance across the Greater Manchester area.  She has also held sessions in helping Governing Bodies get from Good to Outstanding.  Ariana sits on the Manchester Schools Alliance Board helping to develop good governance across the city.

Ariana works on a part time basis as an associate lecturer in Business Management, Strategy and Project Management and Risk.  She has Professional Indemnity Insurance, Public Liability Insurance and is DBS checked.

Ariana can be contacted via Purple Governance or on a.yakas@btinternet.com

Martin has many years of experience as a governor in Manchester and Oldham schools. He was appointed as a National Leader of Governance in 2012; to be a system leader and provide specialist peer to peer support for governance.

He is currently chair of governors of a school in Oldham, foundation governor at a school in Manchester and an additional governor supporting a school during academy conversion.

In 2014 he graduated with the first MA (Ed) in governance. It was the result of four years study and his research thesis was used as evidence in the debate on the contribution of governance to school success. It was published by the SASE project. It fed into the movement towards a professional volunteer governance community. His 2015 research on teacher pay decisions by governors has been used by the NGA, DfE and Warwick University/NASUWT.

He is an NCTL trained governance reviewer and has provided training for Local Authorities.

Martin is currently promoting recognition for volunteers and governors.

Martin can be contacted via Purple Governance or via matthews684@aol.com

Matt Miller is a retired senior detective in the Metropolitan Police Service and highly experienced in leading and managing school based investigations.

He is an NLG Advocate and one of the team commissioned by the National College for Teaching and Leadership to deliver external review of governance training. He has conducted reviews of governance in many different types of school settings and is considered an expert in this field.

He is the strategic lead for governance in Enfield and delivers governor training across London and the south of England. He is also licensed by the Home Office to deliver ‘Prevent’ training.

He is the Chair of Governors at Highlands Secondary School since (outstanding Ofsted judgements 2011 & 2014 and subject of Ofsted ‘from coasting to soaring’ case study 2012) and was also appointed by the Secretary of State in June 2013 to chair an Interim Executive Board in a struggling primary school.

Matt was awarded the MBE in the Queen’s Birthday Honours List 2016 for services to education.

Matt can be contacted via Purple Governance or via mmillerconsultancy@hotmail.com

Lynn is an Educational consultant based in the North West and focused on secondary school improvement and in particular raising achievement for disadvantaged students. Lynn works for a very successful teaching school delivering a range of leadership training courses to support continuous improvement. She undertakes pupil premium reviews and has a significant record of accomplishment in ‘closing the gap’ for disadvantaged students.

Lynn is a director of a large multi academy trust in the North West consisting of a full range of schools, primary, secondary and post 16 as well as a special school. She chairs the NW1 Maths Hub, which brings together maths specialists from universities, schools and colleges to develop strong practice in maths teaching methodology for sustained improvement. Lynn is also a governor of a very large college in the North West, which is itself working in partnership with another College supporting improvement across the sector.

Lynn was the Head teacher of Sale High School from September 2009 to August 2017. She served previously as a deputy Head teacher in two schools, one in Salford, which she helped to move out of special Measures and one in Warrington, an 11-18 setting that moved to Good.

Sale High School improved from special measures to Good with outstanding areas in June 2015 under Lynn’s leadership. The school had suffered from a dramatically falling roll and a poor reputation within the local and wider community. The school is vibrant community where high expectations support students to aspire. It is now a school of choice for local parents and is currently over-subscribed.

Lynn can be contacted via Purple Governance or via lynn.nicholls115@outlook.com

Anne-Marie is an educational consultant based in the North West who has a wide range of education and strategic leadership experience and is the founder and Director of ESN, (Education Solutions North). Anne-Marie has, in effect, sat on ‘both side of the table’ having worked at a senior level within the Education and Skills Funding Agency as a Project Director, in a local authority as a School Improvement Advisor, and been part of the senior leadership team within a Further Education College and a Multi Academy Trust.

She is acutely aware of, and able to operate and communicate within politically sensitive environments and has extensive experience of developing productive relationships with stakeholders to engage, motivate and coach those involved to find solutions to complex, challenging and exciting initiatives.

Anne-Marie has a deep understanding of working in an environment of uncertainty and continual change and has demonstrated an ability to effectively deal with existing or potential conflict at an individual, team or strategic level.

She is currently registered as one of the approved Level 4 Project Planners with the Government Project Delivery Profession team.

She has skills and experience and can offer expertise in the following areas:

* Reviewing and assessing, previously as part of an Education Funding Agency team, Free School, and University Technical College applications from sponsors, all of which have successfully opened schools

* Writing bids to expand existing or developing MAT provision, with previous bids amounting to supporting growth by a third of the original MAT size.

* Project management of capital project teams, previously as an Education Funding Agency Project Director for 15 projects, each with an individual project value of between £7m and £10m

* Guidance on the implementation of strategic and operational MAT practices and procedure for example; GDPR, school policies, Freedom of Information requests, Subject Access requests for personal data and public consultations

Anne-Marie has an MBA in Education Administration, holds an enhanced DBS and personal indemnity insurance.

She can be contacted either through Purple Governance or through anne-marie@educationsolutions.org.uk